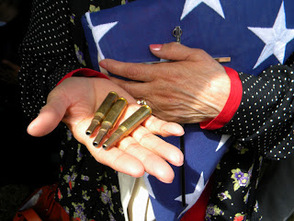 IAW U.S. Flag code, 8. Respect for the Flag. (h) The flag should never be used as a receptacle for receiving, holding, carrying, or delivering anything. This includes empty shell casings from the firing party. They should never be placed in the flag!